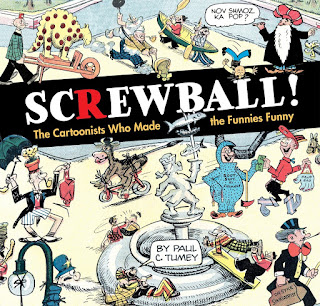 My first book, Screwball! The Cartoonists Who Made the Funnies Funny is scheduled for publication in September 2018. The publisher will be The Library of American Comics/IDW. Eisner-Award winner Dean Mullany will design and edit the book, with Bruce Canwell and Lorraine Turner providing their expertise, as well. It will be a large, full-color hardcover art book offering around 275 pages resplendent with rare comics, art, photos and original research.

The story of screwball comics in America is a large topic, more sprawling than one book can reasonably encompass if one wishes to present satisfying chunks of reprints. Foo this reason, I decided, after much deliberation, to narrow the focus of this book on American newspaper comics up to about 1950.

This means the screwballists who primarily worked in comic books -- Jack Cole, Dick Briefer, Basil Wolverton, Harvey Kurtzman, Will Elder, Al Jaffee -- are saved for, hopefully, another volume. Even with this limitation, it was necessary to halve my list. Hey-- waitaminit - why am I telling you what SNOT in the book? If I want you to read my book, maybe I should tell you some of what will be in it!

We are creating a retrospective that will be broad and deep. There will be 15 chapters, each one focusing on a particular cartoonist or comic strip with an in-depth text essay and assortment of carefully curated strips, art, and photos. Years of searching and thousands of dollars have gone into procuring the art for this book. The final selection represents not just my work, but the tireless work of many other collectors, scholars, archivists and librarians. I am deeply grateful for their help.

The chapters are arranged in order by the birth years of the cartoonists so one gets a sense of the overall progression of the arc of screwball humor in newspaper comic strips. The total span starts in the late 1870s and ends around 1950. In addition to newspaper comics, the study also touches on screwballism in magazine cartoons and comics, animation, movies, advertising, books, postcards, and more.

Aside from being fun to read, this stuff really fries ice! Zany humor comic strips link up more than we realize to screwballism in other popular art forms. Thus, to understand Charlie Chaplin, the Marx Brothers, Tex Avery, Bob Clampett, Spike Jones, Ernie Kovacs, and Harvey Kurtzman, studying the comic strips they read -- and the cartoonists they personally knew and worked with -- enhances the picture.

I've selected a mixture of famous and obscure cartoonists. In the case of the well-known cartoonists, I've dug deep to provide more comics, art, and information than what has been commonly available. I've treated the obscure cartoonists with the same respect. In two cases, I'm focussing only on a single strip. In one case, the cartoonist's life and work has been well-covered already, except for the single screwball masterpiece (Stumble Inn). In the other case, Boody Rogers, the cartoonist worked mainly in comic books, but had one sublime nutty comic strip.

As of this writing, and subject to change, here is the list of chapters, in the order they will appear:

"Anything that says New Orleans and chess"

October 24, 2015
Those were the instructions I received from New Orleans Chess Festival founder and organizer Michael Tisserand, who asked me to design the event's t-shirt. This annual event is free and attended by 250 kids -- a worthy cause, to be sure. I met Michael because we share a common interest: old comics. Michael is a journalist, chess instructor, and book author. He's written notable books on Zydeco music and New Orleans in the aftermath of Katrina. His latest project, years in the works, is a full-fledged, whole enchilada biography of Krazy Kat's creator, George Herriman. Micheal has been kind enough to read drafts of my various professional writings on comics and offer helpful suggestions. He also kindly let me give him an early version of one of my lectures, via Skype. So, when he contacted me to say the artist he had lined up to design his t-shirt wasn't going to be able to do it, and did I have any ideas, how could I say no?  I spent a few days thinking about it a
Post a Comment
Read more

The Kitchen Notepad Cartoons of 2013

May 18, 2015
I sing now to you a tale of a family and their doodle-toons. A grubby, stained, mostly used small pad of paper sat by the phone in the kitchen. One day, I drew and colored a cartoon on it, like so: If it looks like the man has his hand in his fly, that's my ineptitude at drawing hands, and is unintentional. Anyway, I found I liked the pad. So I drew a few more cartoons. The little green figures you see in the lower right-hand corner are the vestiges of when the pad was first used by me to make a rudimentary animation flipbook. The next time I picked the kitchen notepad up, I saw that my wife, the artist Claire Mack had added a fantastical drawing: I followed suit with a Groucho mushroom, of course: Claire added a celestial scene: One day, our teen-age daughter, Olivia, added some of her own cartoons: To which, I responded with this very strange fellow, Lemon-Head: The final three pages in the pad are by Claire,
Post a Comment
Read more